Kratom Side Effects and Addiction Signs

Kratom is an increasingly popular substance derived from a plant that grows in Southeast Asia. Kratom effects include pain relief, mood enhancement, energy, and anxiety relief. However, kratom is also known to have addictive qualities and to potentially cause harmful side effects. It’s important to be aware of the side effects of kratom when considering use of this substance.

Is Kratom a Controlled Substance?

Although kratom is a controlled substance in many other countries, kratom is not regulated by the U.S. Drug Enforcement Administration. However, the U.S. Food and Drug Administration (FDA) has listed kratom as a “drug and chemical of concern.”1 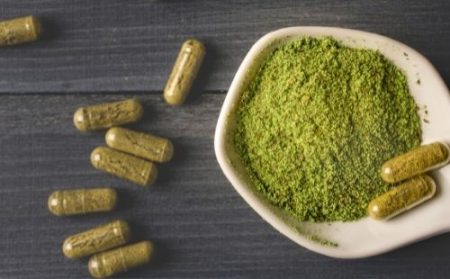 Kratom is typically consumed in the form of capsules or powder mixed with hot water as a tea. Kratom effects range from stimulating to sedative, depending on how much is consumed.

The FDA is advising people not to use kratom because of its opioid-like effects that “expose users to the risks of addiction, abuse, and dependence.”1 The FDA banned the import of kratom into the United States in 2014.

Moreover, several states have regulated its use. In 2016, the State of Alabama became the sixth state to restrict kratom use, classifying it as a Schedule 1 drug alongside Ecstasy and heroin.2 Other states are also considering regulating kratom as a controlled substance.3

What Are the Uses and Effects of Kratom?

Kratom is commonly taken in the form of a powder added to teas, drinks, and shakes. People also take kratom in the form of pills, capsules, and extracts. The FDA does not recognize any accepted medical use of kratom.1 However, this substance has traditionally been used by people in Southeast Asia for its medicinal properties as both a stimulant and pain reliever. It also is used as a muscle-relaxant and to treat diarrhea.4

Kratom is also used for its relaxing and opioid-like effects. Compounds found in kratom leaves interact with opioid receptors in the brain.5 Kratom effects from these opioid properties include reduced pain, sedation, and euphoria, especially when kratom is consumed in large amounts.5 Some people also use kratom to treat panic attacks and anxiety.

Some people use kratom to lessen the withdrawal effects when stopping use of opioids or other addictive drugs.4,5 Like opioid medications, kratom can also be addictive but with less severe withdrawal symptoms than opioid drugs.4

Kratom Use, Effects, and Risk of Addiction

Although technically not a narcotic, kratom is just as dangerous, with side effects mimicking that of other opioids like heroin.

Is Kratom Safe Because It Is Plant-Based?

You may think that because kratom is plant-based, it is safe to use. However, that seems to depend on how it’s used. According to studies, many people can use kratom with minimal side effects.4 But kratom dependence and addiction can still occur.4,5

Also, kratom can have dangerous interactions when mixed with other drugs. Using kratom with other medications and illicit drugs increases the risk of toxic effects, including death.4,5 In 2016-2017, kratom was identified as a cause of death in 91 overdose deaths in the U.S.4 According to the FDA, most of these deaths involved the use of contaminated products or mixing kratom with other drugs such as heroin, fentanyl, cocaine, alcohol, benzodiazepines, morphine, and prescription opioids. Toxic kratom effects, including liver damage, can also occur when taking this substance with certain prescription medications, such as diphenhydramine (an antihistamine), and caffeine.5

What are the Effects of Kratom in Low Doses?

When taken at low doses, kratom reportedly acts as a stimulant, like cocaine or amphetamines.5 Users report feeling more alert and focused.5 People who take kratom in small amounts every day may do so because they feel more productive and sociable.6

Kratom typically takes effect about 10 minutes after it is consumed, and kratom effects usually last about 2-3 hours. This can vary greatly depending on your body chemistry, your weight, and if you have taken kratom previously.

What are the Effects of Kratom in High Doses?

At high doses, kratom is used mostly as a pain reliever. Kratom is also taken at higher dosages to induce what is known as kratom euphoria.4,6

As the dosage is increased further, kratom effects are sedative. This means you will feel sleepy, lethargic, and unmotivated. The more kratom you take, the higher the sedative effect you will feel.7 Taking kratom in larger doses increases your odds of experiencing harmful kratom side effects.

What are the Side Effects and Risks of Consuming Kratom?

Kratom use does have risks and side effects.  Side effects of kratom use become stronger as the dosage is increased. In a survey of people in the U.S. using the substance for at least 1 year, doses of up to 5 grams reportedly produced less harmful kratom side effects than doses of 8 grams or more.4

Kratom side effects include:4,6

Kratom is also known to negatively impact the brain and nervous system, causing:4,7

What are the Signs of Kratom Addiction?

Regular use of kratom can lead to dependence and addiction. A sign of dependence is when you develop drug tolerance and need an increasing amount of kratom to achieve the same effects as when you started using it. Dependence is considered an addiction when you are unable to function normally without using kratom, and when getting and using kratom is a central focus of your daily life.

Signs of kratom addiction include:4,6,7

Can You Overdose on Kratom?

Although kratom overdose is not as common as with other drugs of abuse, it is possible to overdose with kratom use.4,5 The risk of kratom overdose increases if consuming contaminated products or when mixing kratom with other prescription medications, illicit drugs, or alcohol.4,5

Signs of kratom overdose include:4,7

What Is the Treatment for Kratom Addiction?

Kratom addiction can be treated in a similar manner to opioid use disorder.4 Standard medical management includes tapering a person off the drug gradually and controlling withdrawal symptoms and cravings with buprenorphine or methadone. 4 Behavioral therapy also has proven effective in treating people with kratom addiction.5

Other options for kratom addiction treatment include:4

If you or someone you know is struggling with kratom dependence, call 800-407-7195(Who Answers?) to speak with a treatment specialist for recovery options near you.

Kratom use over time can lead to dependence and addiction. Kratom can have dangerous side effects when combined with other medications and illicit drugs.