Rates of opiate abuse have surged over the past decade, creating a drug epidemic unlike any before. Opiates and prescription-based opiates in particular have exposed most anyone with health insurance coverage to the perils of opiate abuse and addiction, older adults included.

While the damaging effects of these drugs know no bounds as far as age, gender or race goes, older adults stand to experience the worst of what opiate abuse has to offer. In effect, signs of opiate abuse well reflect the damage these drugs do to the body. As the aging process takes over, opiate effects carry an even greater risk for addiction let alone the serious medical complications that can result.

While opiates work well at relieving pain symptoms, they do this by slowing down chemical activities throughout the brain and central nervous system, according to California State University. Opiates force the release of brain neurotransmitter chemicals, most notably norepinephrine, serotonin and dopamine.

When used on a short-term basis (not to exceed three months), opiates pose minimal risks. Unfortunately, unintended side effects of these drugs, such as euphoria and calm, place users at risk of engaging in opiate abuse practices.

Opiates can also cause structural damage to brain cells over time, impairing their ability to produce needed neurotransmitter supplies on their own. These factors combined place older adults at increased risk of health complications, physical dependence and addiction. 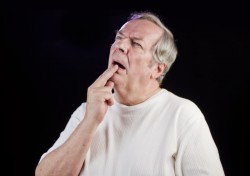 Forgetfulness and lapses in consciousness are signs of opiate abuse in older adults.

Signs of opiate abuse show up in a person’s physical health as well as within his or her daily behaviors. Signs to watch out for include:

These signs become more pronounced the longer a person abuses opiates. In the process, cycles of physical dependency and addiction gradually take hold as brain chemical levels skew further and further off balance.

Over time, the brain’s ability to regulate the body’s system becomes compromised as opiates essentially take over the brain’s chemical system. For these reasons, older adults stand to develop serious health complications the longer opiate abuse continues, according to State University of New York.

Older adults who already have one or more health problems can expect to see these conditions worsen since opiates interfere with the body’s natural healing and repair processes. In cases where a person takes medications to treat existing medical problems, drug interactions with opiates will likely limit the effectiveness of any treatment medications he or she is currently taking.

One of the more serious risks associated with opiate abuse in older adults has to do with the high potential for overdose. Since opiates work to slow down the body’s major systems, once a person reaches a certain dosage level, opiate effects can quickly shut down the body’s respiratory system altogether.

The Need for Treatment

Considering the need for medical treatment tends to increase as the body ages, it’s likely that older adults will be prescribed opiate-type drugs whenever pain symptoms become an issue. While not everyone faces the risk of developing an opiate abuse problem, the range of circumstances that affect older adults, such as aging and ongoing medical problems, increases their exposure to opiate drugs, which in and of itself can become a risk factor.

If you or someone you know struggles with opiate abuse and have more questions about opiate abuse in older adults, please don’t hesitate to call our toll-free helpline at (800) 407-7195(Who Answers?)  to speak with one of our phone counselors.

Rates of opiate abuse have surged over the past decade, creating a drug epidemic unlike any before. Opiates and prescription-based opiates in particular have exposed most anyone with health insurance coverage to the perils of opiate abuse and addiction, older adults included. While the damaging effects of these drugs know no bounds as far as …

5 Simple Steps to Recovery from Addiction

What to Say to Someone You Want to Seek Treatment