Since heroin addiction affects different people in different ways, what works for one person may not necessarily work for another. Methadone and buprenorphine treatment approaches, for the most part, mimic the effects of opiates. Vivitrol interacts with different chemical processes in the brain while producing similar effects in terms of helping to eliminate the need for heroin. For someone coming off a chronic heroin addiction problem, Vivitrol injections may well provide the type of support needed to maintain abstinence on a long-term basis.

Heroin, no doubt, causes considerable damage to the brain and body on a physical level; however, the actual effects of heroin addiction take root inside a person’s thinking and behaviors. According to the Substance Abuse & Mental Health Services Administration, these changes account for why it’s so hard for addicts to maintain abstinence in recovery.

While it may seem like the physical effects of the drug drive the incessant drug cravings experienced in recovery, it’s actually the brain’s psychological dependency on heroin’s effects that make long-term abstinence so hard to come by. In effect, a person reaches a point of believing he or she can’t cope with daily life without heroin. 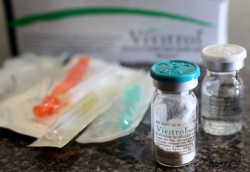 Vivitrol is not opiate-based, thus has no risk of abuse or addiction.

Vivitrol, a brand name for naltrexone, acts as an opioid antagonist that’s formulated to keep heroin and opiate drugs in general from altering chemical processes in the brain. Naltrexone in pill form has been around since 1984, while Vivitrol, the injectable form of naltrexone was only just approved as an opiate addiction treatment in 2010.

Whereas methadone and buprenorphine act as opioid agonists, stimulating brain chemical activities and weaning a person off heroin effects, Vivitrol keeps a person from experiencing the “high” effects of heroin in the event of a relapse episode occur, according to the Journal of Substance Abuse: Research & Treatment.

As an injectable, Vivitrol produces long-term effects so a person only needs to receive an injection on a monthly basis. Considering the compulsive drug-using behaviors that come with heroin addiction, receiving a monthly treatment as opposed to the daily dosing required for methadone and buprenorphine treatment works to break the habit of engaging in regular drug use altogether.

Vivitrol’s ability to block the effects of heroin in the event of relapse also works to extinguish the expectation of a “high” effect when engaging in drug abuse. According to the National Institute on Drug Abuse, this mechanism in particular goes a long way towards breaking the mind’s psychological dependency on the drug’s effects. Unlike methadone and buprenorphine, Vivitrol is not an opiate-based drug so there’s no risk of abuse or addiction.

I’m Addicted to Heroin, Will my Doctor Still Help Me?

Breaking the mind’s dependency on heroin’s effects works in much the same way as breaking the body’s dependency on the drug; however, the psychological aftereffects of addiction can last considerably longer than the a physical dependency. Without the needed supports in place, someone who’s recovering from heroin addiction remains at risk of repeated relapse episodes, which only makes it harder to overcome the drug’s hold on the mind.

If you or someone you know struggles to maintain abstinence in heroin addiction recovery and have more questions about how Vivitrol works, please don’t hesitate to call our toll-free helpline at (800) 407-7195(Who Answers?) to speak with one of our addictions specialist.

Should I Seek Help for Narcotic Abuse?