5 of the Most Common Narcotics According to the DEA

The Drug Enforcement Administration or DEA lists five of the most commonly abused narcotics and their properties. These narcotics are very addictive and very difficult to get off once you are addicted. Although withdrawal from these drugs is not deadly it is extremely unpleasant which makes the relapse rate extremely high. If you are addicted to any one of these drugs, you should seek treatment as soon as possible.

Oxycodone is a prescription painkiller that is mainly used to treat chronic pain. Unfortunately, it is also one of the most abused painkillers on the market. This synthetic is derived from the parts of the opium poppy. This sedative is also extremely easy to overdose on, especially if you are combining it with alcohol or other sedatives.

Methadone is an opium like synthetic narcotic. It has been in use for several decades as a treatment for opiate or opioid addiction. Unfortunately, it is addictive itself. Many people trying to get off opiates wind up addicted to methadone. It is not chemically like the other opiates, the effects and side effects are the same. 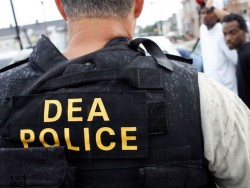 The DEA lists heroin as one of the most common narcotics.

Heroin is an illegal opiate. It is extremely addictive because it acts on the body very quickly. Heroin addicts smoke, inject, or snort the heroin. Although the purity of heroin has gone down in recent years, it is still an extremely potent drug. There are several variants of heroin on the market. These variants are:

Heroin is mixed with powdered milk, starch, and quinine. It is also mixed with other drugs in order to enhance their effects.

A heroin addiction can turn deadly very quickly and the Centers for Disease Control suggests that heroin overdose is reaching epidemic proportions.

Opium is the original opiate. It is as pure as it can get. Opium is a direct extract of the papaver somniferum flower also known as the opium poppy. Although opium is sometimes brewed into a tea it is also smoked. It has an extremely colorful history that goes back centuries in both Eastern and Western culture although it is less popular now than it has been in the past.

Morphine is a nonsynthetic painkiller derived directly from opium. It is extremely addictive but very useful for treating chronic pain and end stage cancer patients. Morphine is highly regulated and difficult to abuse illegally because of this regulation. It is however extremely easy to overdose on because of how powerful most dosages of it are. It is one of the original medical uses of opium.

If you are addicted to any of these medications, it is important to seek treatment as soon as possible. For more information on any of these drugs or for your treatment options call use at (800) 407-7195(Who Answers?) . We can help you conquer your addiction and avoid the painful withdrawal symptoms.

The Drug Enforcement Administration or DEA lists five of the most commonly abused narcotics and their properties. These narcotics are very addictive and very difficult to get off once you are addicted. Although withdrawal from these drugs is not deadly it is extremely unpleasant which makes the relapse rate extremely high. If you are addicted to …

How Does Addiction Negatively Affect The Family Unit?

Can Narcotic Addiction Treatment Help Me Find a Job?