The Shocking Truth about Meth Addiction

Meth, also known as crystal meth, exists as one of the most powerful stimulant-based substances around. As a form of methamphetamine, using meth on a regular basis wreaks havoc on brain and body functions.

Once a person develops meth addiction, quality of life plummets leaving a shell of a person in its wake. Others can easily see the shocking truth about meth addiction, while the addict remains for the most part unaware.

As with most all addictive stimulants, meth addictions act aggressively, taking over brain and body functions within a short period of time. Likewise, the damage done to the brain is considerable and oftentimes permanent.

Without needed meth addiction treatment, users leave themselves open to ongoing decline, both physically and mentally. In effect, the shocking truth about meth addiction lies in the overall devastation this drug causes in the addict’s life.

A meth “high” produces a surge in energy and feelings of euphoria, the key initial ingredients that drive continued meth use. According to Harvard Health Publications, an estimated 1 out of every 25 Americans have tried methamphetamine at some point in their lives.

Like most all addictive drugs, meth usage trends run high inside big cities; however, the highest rates appear in rural areas within Iowa, Idaho and Utah. Part of the reason for its high use in rural regions has to do with the meth manufacturing process.

“Meth houses” can be set up within any locale since everyday household products are commonly used to make the drug. Overall, the more secluded the area the better, so rural areas work quite well in this respect.

Meth can be smoked, snorted and injected with injection routes producing the severest form of meth addiction.

Meth Effects in the Brain

Meth’s stimulant effects stem from a massive release of dopamine chemicals in the brain. When ingested, meth forces dopamine-releasing cell sites to produce dopamine in excess amounts while blocking the brain’s natural reuptake or recycling mechanism, according to the National Institute on Drug Abuse.

Meth addiction, per se develops out of the effects had to the brain reward center, which is mostly regulated by dopamine level fluctuations. Normally, dopamine levels increase in response to enjoyable experiences or activities had throughout the day. In effect, the reward center considers these events essential to a person’s well-being and overall survival, much like love, food and water.

When dopamine levels increase, the reward system records these events and uses the information to form a person’s motivations, drives and overall outlook on daily living. With meth addiction, the brain reward system has come to view meth effects as essential to a person’s survival due to the repeated surges in dopamine levels. At this point, a person’s world revolves around getting and using the drug. 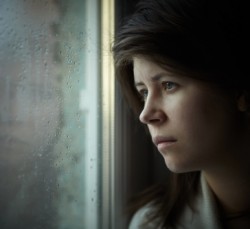 Meth addiction can cause depression.

The brain chemical imbalances brought on by meth addiction leave users highly susceptible to developing psychological disturbances that produce full-blown psychiatric problems. Rampant fluctuations in dopamine levels set off a chain reaction that essential disrupt other chemical systems in the brain. This inevitably impacts a person’s emotional and mental well-being.

Over time, meth addiction causes any number of psychiatric symptoms to develop, including:

In effect, these developments make it all but impossible for a person to cope with everyday problems. In turn, these effects may well persist for up to a year after stopping drug use.

While other forms of long-term drug abuse may cause a certain degree of brain damage to develop, meth takes such a tremendous toll on brain cell functions that pronounced brain damage is more often the norm than the exception. With meth addiction, repeated drug use destroys nerve cells in the brain as well as throughout the body’s central nervous system.

In addition, the damage done to the brain’s reward system leaves a person unable to experience any form of pleasure or sense of contentment for years after stopping drug use. Ultimately, meth addiction changes the brain on a molecular level, reconfiguring chemical pathways and eventually changing the overall structure of the brain.

Damage Done to the Body

Meth’s stimulant effects place an incredible strain on the body’s circulatory system, narrowing blood vessel passageways in the process. Narrowing passageways slow and at times cut off circulation to most every part of the body. According to Frontline PBS, these conditions weaken blood vessels over time to the point where tissue damage develops. During the course of meth addiction, circulatory problems place users at high risk of stroke and heart attack.

Meth addiction also causes severe tooth decay, a condition commonly referred to as “meth mouth.” Meth mouth takes the form of rotting teeth that appear blackened and stained. The chemicals used in the making of meth contribute to tooth decay as well as the “dry mouth” syndrome users experience while on the drug.

While common household chemicals are commonly used in the making of meth, these materials contain toxins, many of which are highly volatile. According to the University of Nebraska at Lincoln, meth ingredients may include:

Meth houses can be set up inside motel rooms, apartments, barns, vehicles and vacant buildings. Considering how volatile these chemicals are, fires and explosions happen often, exposing surrounding areas to hazardous gases. Exposure to these materials can cause a range of symptoms, including:

Meth’s powerful effects on the brain and body make for a highly addictive substance that rivals cocaine and heroin in terms of addiction potential. As with most any form of addiction, the effects of meth addiction only worsen with time leaving users hopelessly dependent on the drug’s effects to function at all.

If you or someone you know struggles with meth addiction, the sooner you get needed treatment help the better. If you have any questions about meth addiction or need help locating treatment programs in your area, please feel free to call our toll-free helpline at 800-407-7195(Who Answers?) .

Meth, also known as crystal meth, exists as one of the most powerful stimulant-based substances around. As a form of methamphetamine, using meth on a regular basis wreaks havoc on brain and body functions. Once a person develops meth addiction, quality of life plummets leaving a shell of a person in its wake. Others can …

Is Alternative Opiate Addiction Therapy Right for You?

Can My Insurance Pay for Narcotic Addiction Treatment?